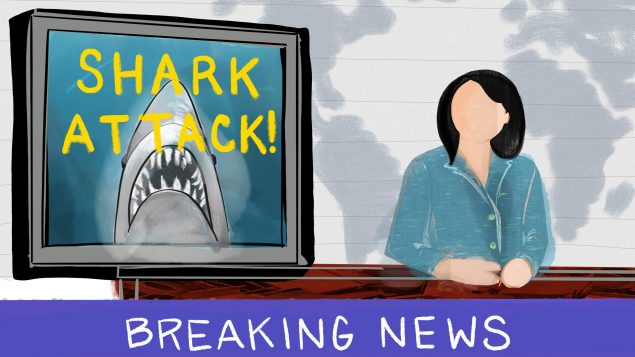 What’s more likely: death by shark attack, or death by lightning strike? The science suggests you’ll choose “shark attack”… but that’s not the right answer. So why do so many of us agree? It’s called the availability bias: our tendency to assume that events that come easily to mind must be more common or true.

Test yourself. Try the demo.

The San Francisco Police Department will now limit their release of mug shots to cases that require public assistance or public warning. Why this shift? Every person who is arrested has their photo taken during the booking process. When released, these photos often remain in the public domain… even when charges are dropped or the individual is found not guilty. This can lead to a type of availability bias called an illusory correlation: “When two rare things occur simultaneously [like crime and, by definition, minority status], our minds tend to overestimate the relationship between those two things,” says Berkeley professor Jack Glaser. When we see these mug shots, “the distinctiveness of blackness and crime going together stands out [and] is more likely to be remembered”. Our minds then believe this relationship is more true, which can lead to dangerous errors in judgment from how we perceive innocent actions (like checking out of an Airbnb) to who we stop and search and even how we speak to each other. Rethinking how the media portrays crime, as the SFPD did, is one step towards weakening the availability bias.

Vaccines have eradicated diseases. No scientific data shows a connection between vaccination and autism. So why is fear of autism motivating some parents’ decisions not to vaccinate their children? Read Sarah Watt’s article “5 cognitive biases that explain why people still don’t vaccinate” at Forbes.

“If you’re not using a formal, methodical system to make product decisions, measure your sales pipeline, track your VC meetings, evaluate your marketing efforts, etc., you’re doing something seriously wrong.” Why? The availability bias. For more, read Dan Schipper’s article “We all have a bias that makes it hard to know if we’re successful” at Quartz.

There’s a common belief that women in their 30s stop working in order to start families. However, a global survey by the ICEDR found that men and women around 30 were leaving work at the same rates, and for the same reasons: to work for a competitor. Read more here.

Dr. Harrison Alter suspected pneumonia when Blanche Begaye arrived at the emergency room with breathing trouble. Even after tests didn’t reveal the typical symptoms of pneumonia, Alter was confident in his diagnosis. It wasn’t until Begaye was admitted that Alter realized his mistake: she was suffering from aspirin toxicity, not pneumonia at all! The culprit behind his mistake? Availability bias. Alter had seen dozens of people in the past few weeks suffering from pneumonia, and this pattern of illness influenced his diagnosis despite the lack of proof in Begaye. Learn about how availability bias and other heuristics can impact doctor decision making at The New Yorker.

Music by Miracles of Modern Science

© 2019 President and Fellows of Harvard College