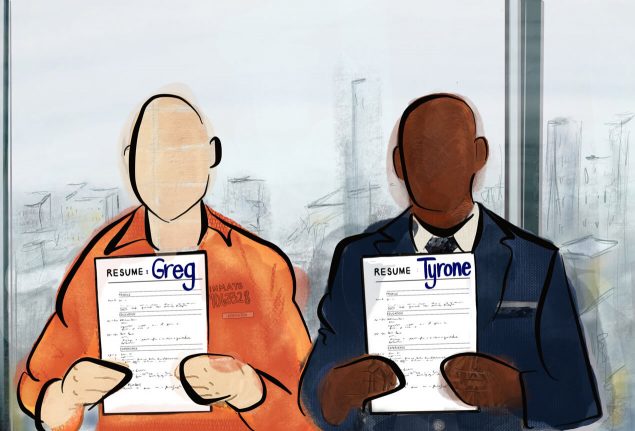 In a groundbreaking study, sociologist Devah Pager showed that being Black hurts an applicant’s chances of being hired just as much as a felony conviction. What do decisions based on gut instincts mean for the survival of a business?

“How Much Does Your Name Matter?”, asked Freakonomics Radio. Hear their thoughts and explore your own name with this app by Nametrix.

If your name decided your profession, what would you be? Check out this infographic showing common names by profession.

“What’s in a name? Potentially your future.” From Jenna Goudreau’s article “13 surprising ways your name affects your success” (Business Insider).

José or Joe: Who gets the job? Watch this Buzzfeed video to hear about why José Zamorra decided to “whiten” his resume, and this Harvard Business School article about why it may have worked.

Can your skin color affect your chances of booking a room? Get the story behind the hashtag #AirbnbWhileBlack (and what Airbnb is doing about it) in this episode from NPR’s Hidden Brain.

“While it’s exceedingly difficult to remove bias from an individual, it’s possible to design organizations in ways that make it harder for biased minds to skew judgment.” Read Iris Bohnet’s tips for taking bias out of interviews in her article “How to Take the Bias Out of Interviews” (Harvard Business Review).

Hiring discrimination against black Americans hasn’t declined in 25 Years. Data from 24 field experiments, across over 54,000 applications and more than 25,000 positions attempts to explain why.

Dr. Devah Pager’s book Marked: Race, Crime, and Finding Work in an Era of Mass Incarceration was published in 2007 by University of Chicago Press.

“Race bias in hiring: when both applicants and employers lose” was created and developed by Olivia Kang, Kirsten Morehouse, Evan Younger, and Mahzarin Banaji. Outsmarting Human Minds is supported by Harvard University, PwC, and Johnson & Johnson.

Sound editing and mixing was conducted by Evan Younger

Music was composed by Miracles of Modern Science

© 2019 President and Fellows of Harvard University